Created in 1989, The International Academy of Television Arts & Sciences Foundation has its own Constitution, Officers and independent Board of Trustees.

Each year, The Foundation administers the Sir Peter Ustinov Television Scriptwriting Award. The competition is designed to motivate non-American novice writers under the age of 30, and offer them the recognition and encouragement that might lead to a successful career in television scriptwriting. Entrants are asked to create a completed half-hour to one-hour English-language television drama script.

The award winner receives $2,500, a trip to New York City, and an invitation to the International Emmy® Awards Gala in November. (TBC) 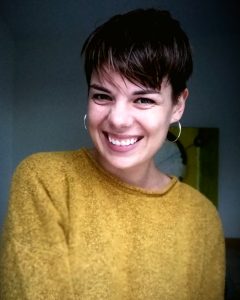 The 2019 Winner, from the UK, was Violet Macdonald for her Script, The Wolf.

Violet Macdonald is an Australian/British writer living in Montreal. She grew up on the island of Tasmania, where she spent her time writing hundreds of poems and short stories, some of which would see her go on to win accolades such as the Ted Hughes Young Poets Award, the H.E. Bates Short Story Award, and the title of reigning Australian Junior Bush Poetry Champion.

She moved with her family to London in 2009, at the age of 15. After finishing her studies in English Literature and Philosophy, she became an award-winning copywriter for global marketing agencies. Violet moved to Montreal in June 2019, where she plans to pursue her dreams of creative writing full time.

Contact us using this form or by emailing foundation@iemmys.tv